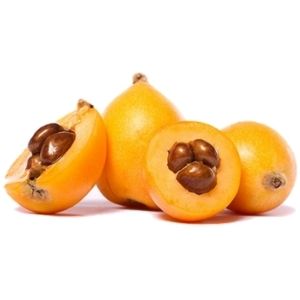 Loquats are unusual among fruit trees in that the flowers appear in the autumn or early winter, and the fruits are ripe at any time from early spring to early summer. The flowers are 2 cm (1 in) in diameter, white, with five petals, and produced in stiff panicles of three to ten flowers. The flowers have a sweet, heady aroma that can be smelled from a distance.

Loquat fruits, growing in clusters, are oval, rounded or pear-shaped, 3–5 centimetres (1–2 in) long, with a smooth or downy, yellow or orange, sometimes red-blushed skin. The succulent, tangy flesh is white, yellow or orange and sweet to subacid or acid, depending on the cultivar.

Each fruit contains from one to ten ovules, with three to five being most common. A variable number of the ovules mature into large brown seeds (with different numbers of seeds appearing in each fruit on the same tree, usually between one and four).

The fruits are the sweetest when soft and orange. The flavour is a mixture of peach, citrus and mild mango. 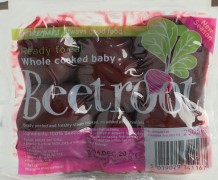 It is selling by kg. THE PRICE IS FOR PER KG. 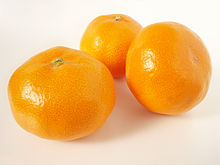 Has Avocado Per Each